Russian state TV on Sunday listed potential targets in the U.S. in the event of a nuclear strike and claimed that its new hypersonic missile technology could reach them in less than five minutes.

Reuters called the report “unusual even by the sometimes bellicose standards of Russian state TV.” The targets included the Pentagon and Camp David. The report came days after Russian President Vladimir Putin warned the U.S. against deploying intermediate-range missiles in Europe.

Putin reaffirmed that Russia will not be the first to deploy new intermediate-range missiles in Europe, but warned that it will retaliate if the U.S. puts such missiles on the continent. He said it will not only target the host countries but field new weapons that will target U.S. decision-making centers. 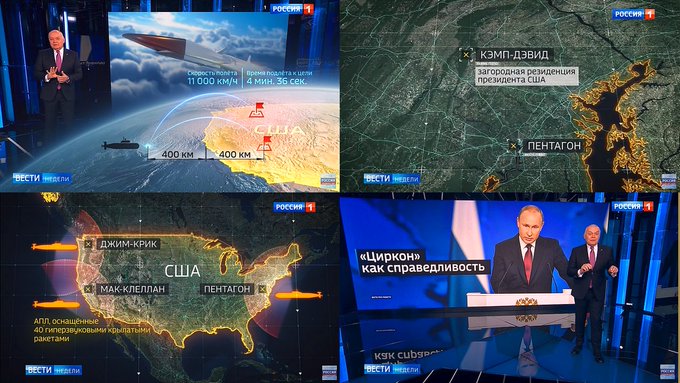 The U.S. insisted that it has no plans to deploy missiles in Europe.

A Putin spokesman said he did not name any “geographic site Russian missiles” might be aimed at. The spokesman said the government does not interfere with news programs.

The Guardian reported that other U.S. sites included Maryland’s Fort Ritchie, McClellan air force base in California and Jim Creek naval communications base in Washington state.

This project is non commercial, to support our investigations you can make payment in Bitcoin: